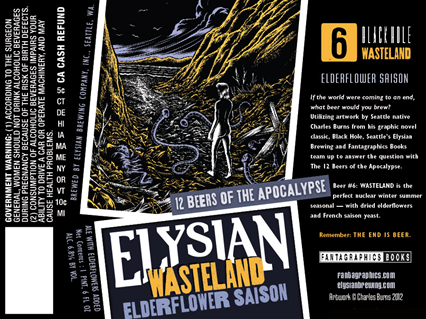 What is Wasteland referring to?

A famine is a widespread scarcity of food,caused by several factors including crop failure, population unbalance, or government policies. This phenomenon is usually accompanied or followed by regional malnutrition, starvation, epidemic, and increased mortality. Nearly every continent in the world has experienced a period of famine throughout history… The third horseman rides a black horse and is generally understood as Famine. The horseman carries a pair of balances or weighing scales, indicating the way that bread would have been weighed during a famine. The indicated price of grain is about ten times normal, with an entire day’s wages (a denarius) buying enough wheat for only one person, or enough of the less nutritious barley for three, so that workers would struggle to feed their families. (Wikipedia)

What would Inky Beer Do?

Inky and Dr. B are lucky to have some skillz in the areas of wild edibles and throwing sticks. When we head for the hills, we will be able to feed ourselves by fishing as well. Inky used to be a good shot with a bow and arrow… need to find a bow before that day comes! Pack some canned goods and get out of civilization. (Dr. B is right… canned goods are too heavy… raid the bulk section of Whole Foods instead.)

Or get another tattoo…

Or be inspired by this graffiti work…