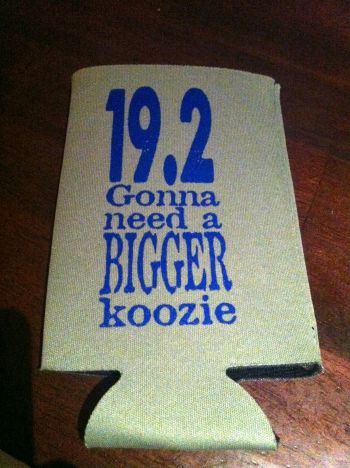 This past Tuesday night, I headed over to the Highland Tap and Burger to attend my first Crafty Ladies Beer Club event. To my excitement, a big crew from Oskar Blues Brewing was there and ready to chat beer and food pairings!

When we checked in, we were given stickers, a 19.2 oz. koozie (yes, it’s that huge!) for the new large cans of Dale’s fresh on the market, and our first beer sample, Dale’s Pale Ale. Below are notes about each sample from both Chris Katechis, “the Gubna,” and Dave Chichura, the Head Brewer of Oskar Blues. 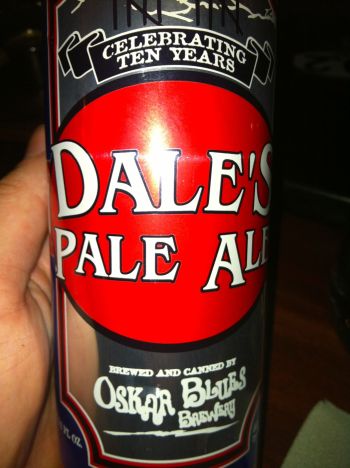 Here it is… Dale’s (infamous) Pale Ale, coming in at 65 IBU and 6.5% ABV. Some would say Dale’s is not a pale, but an IPA. Oskar Blues’ claims that although it’s 6.5%, Dale’s is at the higher end of the spectrum, but still is a pale. Dale’s has lots of “C” hops – Columbus, Cascade, Centennial. Columbus hops shine well in this beer and bring a piney, resiny taste. Cascade and Centennial hops bring a citrusy, grapefruit hops flavor. Delicious. Turns out that 60% of craft brewers, both men and women, prefer hoppy beer. (Seems right to me!)

Many of the women at the event asked, “Why 19.2oz cans?” Chris can back with, “Because we can. (can puns are not lost on me!) Our machine can handle it. The extra tall can, first of it’s kind in the craft beer realm, is suppose to be like a bomber in an Alumatech bottle.”

Deviant (delicious!) Dale’s comes in at 80 IBUs and 8% ABV. Deviant began as an oops batch of Dale’s. All of the hops in Deviant are the same hops featured in Dale’s, but the deviated batch was hoppier and darker than the pale. “How do you fix a batch of beer?” Chris asked the crowd, “(Just) dry hop it and cal it something else!” Henceforth, Deviant now is brewed regularly and features big citrus rhine, as well as the signature piney, resiny taste. Dry hopping alone added 15 IBUs to the original deviated batch. This beer is served in 16 oz cans and is a hop head’s dream.

Chaka is the first collaboration brew between Sun King and Oskar Blues, boasting 8% ABV, focused on using local ingredients from both Denver and Indianapolis. The brewers used Belgian Pale Malt from the Denver area and Hickory syrup and hickory extract from Indianapolis. The brewing process uses all raw materials and was both material and labor intensive. There are 5 strands of yeast used in the fermentation process, all from the south. The taste has low phenols for a Belgian brew, with a little bit of the usual clove and banana present.

Why Sun King Brewing, you ask? Dave (Oskar Blues) and Dave (Sun King) knew each other from brewing at Rock Bottom and have kept in touch since the beginning of their careers in the brewing industry.

Why Alumatech Bottles? They are unique in shape and size and are the first bottles of their kind used with a craft brewery.
It takes more than 10 processes to make the rings on the resealable bottles and Oskar Blues likes that they are extremely portable, lightweight to transport, and fully recyclable.

Sun King and Oskar Blues, jointly, brewed 20 barrel batches at each brewery (Longmont and Indianapolis) and chose separate packaging and artwork for the brews. To get the word out in Colorado that this stellar new beer was available, Oskar Blues sent a bottle to each room booked for the Craft Brewers Conference. The rest is history.

G’Knight, another big beer from OB, has 8.7% ABV, and was named after Gordon Knight, the 3 time GABF winner with 3 different breweries. In the beginning, the OB crew called this beer an IPA, then  after some more discussion about it’s red color, as well as wining gold in a brewing competition under the name of “Imperial Red,” the deal was sealed. To get G’Knight out to the beer drinkers of Colorado quickly, and also to decide which of their new beers people wanted to drink, the OB crew blank canned and hand labelled each can, before self distributing. The G’Knight won out over other new OB beers distributed that day. To quote Chris, “(This) straight up (beer) is a big ass beer. (Enjoy!)” Now, it is available in a 16 ounce can.

Deuce is the shit. No, really, it’s #2 in the series of collaboration brews with Sun King. At 7% ABV, looking awesome in the Alumatech bottles, this beer also shows local ingredients in the form of Pale Malt from Denver and popcorn from Indiana… 43 pounds of popcorn, ti be exact… popped in Denver, 6 ounces at a time. The Deuce will only be available in “cans” and showcases Galaxy Hops from New Zealand and Australia, as well as Weierman Malt (known for little tannins due to it’s state of being in the husk). It’s really good for both brown-nosers and hop heads alike.

Ten Fidy clocks in at a whopping 10.5% ABV. It has malts roasted beyond recognition. To brew this beast, Dave uses 5,000 pounds of grain and two mashes. To get this viscosity, one must only use the mash and not the sparge water; to say the least, this process is expensive and take a lot of time. If you’ve never seen it before, it looks like motor oil. The “Ten” is for 10%, and the “Fidy” stands for “Fuck the industry, do it yourself,” or 0.5%. To quote Chris, “We’re anti-corporate.”

The last words shared from the 2nd largest craft brew in Colorado that night… “Ride bikes, drink beer, and… go fuck yourself.” (I think that Chris just likes the word, fuck.) Life’s too short to live life for the man; get out there and have some fun. If you have not had the opportunity to try any of Oskar Blues’ brews, go find them! They distribute to 29 states now.